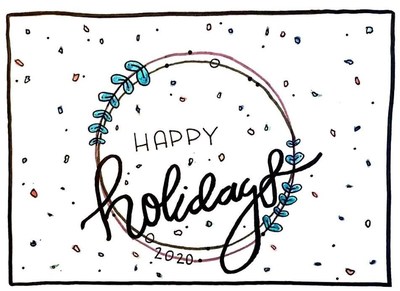 The winning artwork will be used as the image on CNO's official 2020 corporate holiday card.

"Congratulations to Addison and thank you to the nearly 70 children who participated in this year's holiday card contest," said Gary C. Bhojwani, chief executive officer. "We are proud to use Addison's image for our corporate holiday card. In this unusual year where we are practicing social distancing, it's nice to take a moment to connect,  celebrate and spread joy with people to celebrate the holiday and new year season."

As the winning artist, Addison received a $500 Amazon gift card and an additional $500 CNO donation was made to the charity of her choice, the Humane Society for Hamilton County in Indiana. Addison's card took the top prize up against nearly 70 other entries.

"I was surprised I won the contest and was delighted to learn that a donation would be made to the local Humane Society," said Addison. "I chose the Humane Society because I have always been an animal lover and I stand for their cause."

"I was so excited to hear that my niece won the contest. I got emotional when the announcement was made," said Hannah, who started with CNO this year. "I knew she would be overjoyed about the donation to the local Humane Society because she loves animals. I think it's great that CNO asks the contest winners to choose a charity and makes the donation on their behalf. It's a really special thing to be a part of, and an awesome way to show the importance of giving back to the community."

The CNO corporate holiday and New Year's card contest began in 2019 and is open to CNO associates' immediate family members under the age of 18. In addition to the donation made on behalf of the contest winner, CNO also made donations totaling $1,750 to various selected organizations on behalf of the contest's age category winners and runners-up including St. Jude Children's Research Hospital and the Greater Chicago Food Depository. All entrants received either an art kit or e-gift card.  The contest is a continuation of CNO's giving mission of supporting our communities, our associates and our customers in the places where we live and work.